Help Yourself to Health! 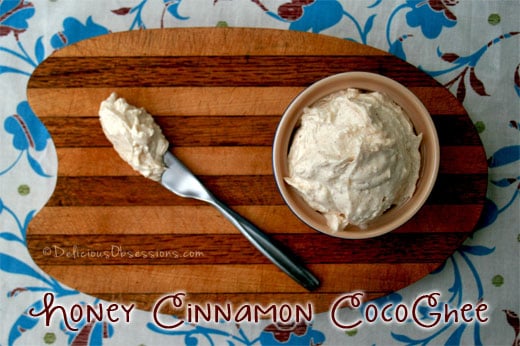 This yummy recipe is from Jessica Espinoza and Delicious Obsessions.   Whipped Honey Cinnamon Butter (using Coconut and Ghee)  is one of her favorites from hundreds on her site. Jessica shared this in our podcast interview about her passion for cooking, her struggles with weight and Hashimoto’s, and the evolution of her great blog.

Like me, Jessica can tolerate ghee but no other dairy. Whipping ghee and coconut oil together makes a great spread, but you can use butter instead if you wish.

The combo of creamy, salty, sweet and cinnamon-y goes well on any Paleo baked goods or sweet potatoes.  Jessica suggests spreading this on her Pumpkin Spice Bread ,or, just eat it on a spoon as a fast, nutrient-dense dessert!

I talk about the value of top-quality Vietnamese cinnamon in this Zucchini Muffin recipe.  Jessica suggests grinding fresh whole sticks in a coffee grinder as you need them, or using a micro-planer for small amounts.  Here’s one cinnamon product on Amazon.  Once you’ve had real cinnamon, you’ll never want the old stuff in your pantry!

This recipe and photo are used with Jessica’s permission.  Visit her site for more!

Please keep up your inspiring and prolific work. I first heard of the Specific Carbohydrate Diet on your podcast. No more stomach aches and no more arthritis pain.  Love your Facebook page.  I really appreciate you!

People get so much more with Consults than what they’re hoping for. I came with one main goal – to decrease my prescription. It’s been cut by 2/3rd’s but my sleep, energy, mood and digestion have also dramatically improved.

Beverly, your devotion to your health practice and podcasts has really changed my life. I work as a dancer/bodywork practitioner in New York City and continue to spread the word on you and your work.

Mary AnnNew Haven, CT
By continuing to browse this site, you agree to our use of cookies. Read our full Privacy Policy for more. Find out more.