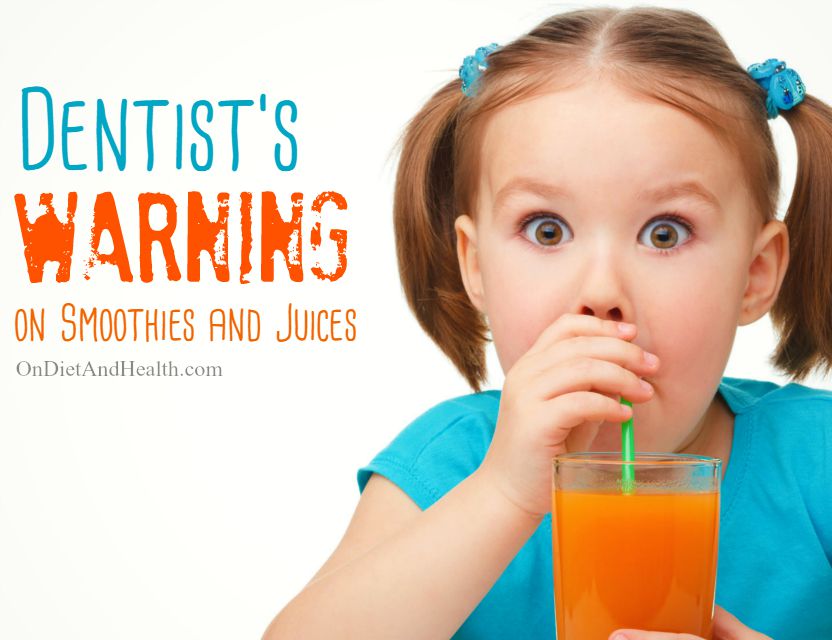 Here’s some dental research from Britain and dentist’s warnings on juice and smoothies.  The statistics on dental decay are pretty shocking.

Top dentists warn that health-conscious parents are “misguidedly” letting their children’s teeth rot by giving them too many fruit smoothies, juice, and juice drinks.

The British government disclosed that dental problems have become the third most common reason for children to be admitted to hospital.  Wow!

An investigation by The Sunday Telegraph newspaper showed the acid levels of popular drinks, including one found to be more acidic than vinegar.  You can see more in the photo below….

Manufacturers are required to publish information about the nutritional content of drinks on the label – but not their levels of acid, which can erode the surface of teeth making decay more likely.

The Telegraph reported that 50 per cent of British five-year-olds now have signs of damage to their tooth enamel caused by excess acid in their diet. The combination of acid and sugar (natural or otherwise) in juice drinks meant they should be restricted to a “once a week treat”. 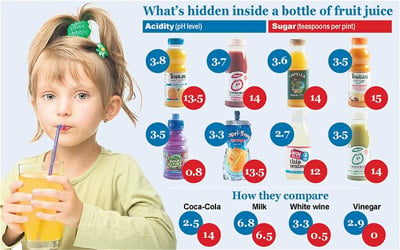 Tooth enamel begins to be destroyed when acid levels in the mouth drop below 5.5 on the pH scale, which has 7 as neutral and 1 as strong acid.  Water has a pH of 7, and milk is just below at 6.8. Vinegar has an acidity level of 2.9.  Some of the fruit drinks tested, including Tropicana orange juice, Capella pure apple juice, and Capri Sun orange drink all had acid levels ranging between 3.3 and 3.8.  100% juice scored as badly as “juice drinks” mixing juice and sugar.

Dentists said that rather than consuming fruit or fruit juices as a snack, they were better consumed at meal times or accompanied with something containing calcium, such as cheese, which neutralizes the acid.  Coke should be avoided completely.

Children should be encouraged to drink water afterwards to wash away some of the acid, but not to brush their teeth until at least an hour afterwards, as teeth are weakened by exposure to acid, they said. Saliva also helps to restore the balance.

The senior dentist said parents should brush their children’s teeth for them until they reach the age of seven or can demonstrate manual dexterity by writing their own name clearly.

I personally do not recommend juice to people of any age, as it spikes the blood sugar and leaves us hungry.  This information just confirms that juice and sodas don’t belong in “The Diet For Human Beings”.