Want better food without cooking from scratch every day?
Make simple foods once or twice a week with my Recipe-Free Batch Cooking eBook. It's FREE! Get detailed steps on how I've prepared food for 20 years. Add your special condiments and flavors before eating - not before cooking. Go Recipe-Free!

Get Your Free Copy Now! 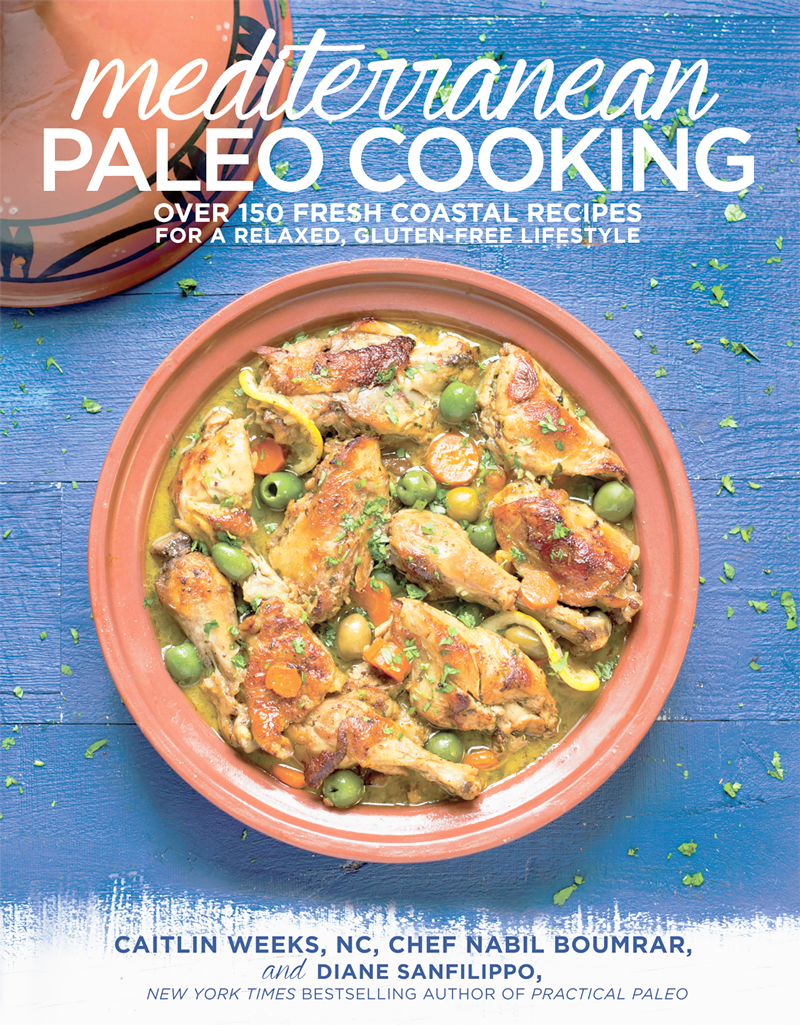 “Mediterranean Paleo Cooking” gets my vote for the 2014 cookbook of the year.  The combined knowledge of a classically trained Algerian chef (Nabil Boumrar) and his Holistic Nutritionist wife (Caitlin Weeks) is a total win.

Add in Diane Sanfilippo (Practical Paleo, Balanced Bites) as book designer and photographer, and you’ve got something great!

As I mention several times in this interview with Caitlin, the pictures and recipe ingredients sent me on a travel excursion to  North African where I could literally smell the spices and taste the tang of the Tajines in my mouth.

If I had to use just one word to describe this book, it would be “savory”.

What is Mediterranean Paleo Cooking?

Caitlin first assures us that authentic Mediterranean cuisine is not low in fat. The Mediterranean Diet is now known for lean meats and seafoods with vegetables, fruits and olive oil.  It’s association with low fat is a modification from American doctors and dieticians who misunderstand the role of fat.   The recipes contain plenty of coconut oil and coconut milk, real olive oil, virgin Red Palm Oil, butter and ghee.

So, Mediterranean Food without the low-fat dogma….

This is traditional food from Southern Europe, North Africa and the Middle East, as Algerian-born chef Boumrar learned from his mother and sisters .  Because of the long French rule in this part of the world, we get French sauces such as Hollandaise, and French techniques for searing and braising.  Lamb and seafoods are common proteins in the region and there are many succulent recipes for lamb, calamari, sardines, fish and beef.

Bone broth is used extensively in the book (with notes on what to substitute if none is available).  There’s a big chapter on liver, heart and other nose-to-tail foods that are so flavorful looking and savory (there’s my word again) that you really do want to try them.

The herbs and spices include, amongst others, cumin, cilantro, lemon, saffron, mint, garlic, onion and cayenne or paprika.

Where Can I Get It?  And When?

Mediterranean Paleo Cooking is on pre-order at Amazon for only $22.50.  It’s also available on pre-order on the Grass Fed Girl website.    It will be in stock in late October 2014 (just in time for gift shopping!).  Here’s a beautiful 90 page inside look  to really tempt your purchase!

Telling you three of the most wonderful words one can say: You were right! I am feeling so much better. The diet is really easy to follow and prepare. I haven’t had any trouble since I made the switch. Thank you!

Janie K.Tulsa, OK
By continuing to browse this site, you agree to our use of cookies. Read our full Privacy Policy for more. Find out more.